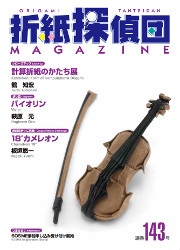 We have been pointed out that Violin by Gen Hagiwara we published in Tanteidan Magazine No.143 (January 2014) significantly resembles Cello by Leo Lai that was published in 2010. While we always take great care in selecting models to appear in the magazine, we have failed to be aware of the preceding work this time. We apologize for that.（2014/03/02)